It sounds pretty easy right? Yeah, it does. But sometimes it is not as straight-forward as it sounds to get your app to return the green status. In this article, I'll be showing you how to deploy your Node.js API using the Elastic Beanstalk CLI and the tips to troubleshooting it if the status returns degraded after deployment.

PS: You can also deploy on Elastic Beanstalk using the AWS console interface, we are only focusing on achieving the same using the CLI

Now, you are ready to deploy your app on Elastic Beanstalk.

Open your project in a terminal and cd to the root directory. Verify that EB CLI has installed by running the command:

Things to note when responding to the prompts of eb init

Now, you should have a .elasticbeanstalk folder created which will contain the deployment configurations for your application.

Here you'll specify the environmental variables that your application needs to run. You can also specify commands that should run immediately the application starts, for example run migrations, etc. Check the docs for more details of the different types of commands you can specify using .ebextensions

In the project I used in this article, I want to set some environment variables such as NODE_ENV, DATABASE_URL, JWT_SECRET. I also want to run migrations for the database. To achieve that, I followed the steps below:

To solve this problem, you'll need to override GIT so that EB uploads the files directly from your local machine instead of GIT repository.

Create a .ebignore file Copy the content of .gitignore into .ebignore

That is it, when EB CLI detects the presence of .ebignore, it'll not use GIT as source control, rather it will deploy directly from your local machine by bundling everything that is not in the .ebignore. That way you can keep .ebextensions in the .gitignore to avoid exposing sensitive data.

To create the Elastic beanstalk environment for the application and deploy it, run

The <environment-name> is the name of your application, in this example I used demo hence the command is eb create demo. Once the environment creating starts, visit your AWS console and navigate to Elastic Beanstalk, you'd notice that the resources needed to deploy your application is being provisioned. You'll also notice that the environment variables that were specified in the .ebextensions/options.config have been added to the Sotware configuration as can be seen in the screenshot below: 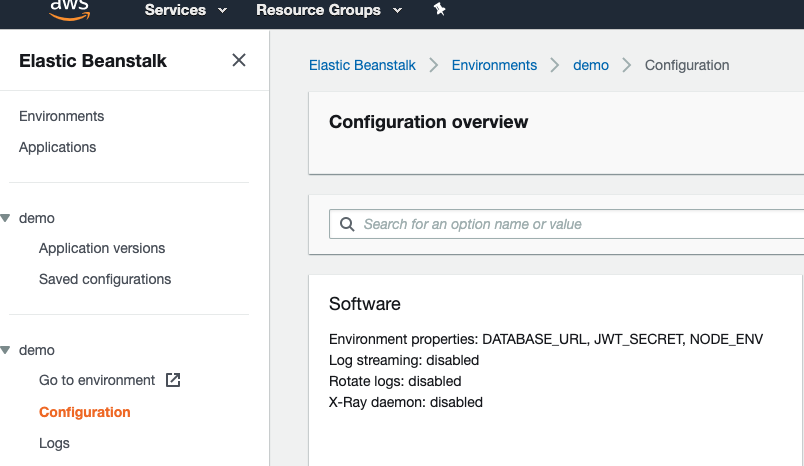 The screenshot below shows a successful deployment of the application: 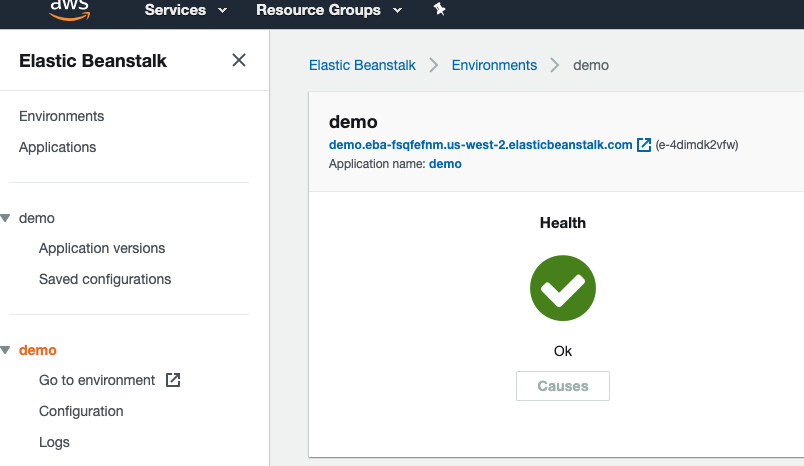 Now that the application has successfully deployed, let's look at some operations that you may likely need to perform on your EB EC2 isntance.

ssh into the EC2 instance

To ssh into the EB EC2 instance, run

To navigate to the location of the application files, run

You can also run any commands such as migrations, etc as you need inside the application as usual.

Sometimes, the application status will transition to degraded or severe, whatever it is, provided it's not green, it means there might be some problems that you need to fix. You can view the logs by running:

Deploying an update If you need to deploy an update to the application, run

We've walked through how to deploy Node.js API on Elastic Beanstalk using the CLI. Though everything done in this article can be achieved from the console dashboard. The only exception is running commands inside the application which can be achieved via ssh.

If you have got any questions don't hesitate to reach out. You feedback and contributions are greatly appreciated.

How to Use Sequelize on an Existing Database

Send Email with SendGrid and Mailgen in Node.js